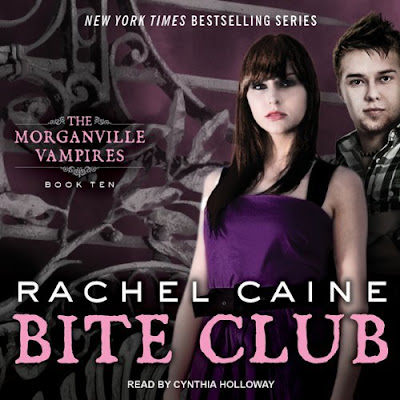 After discovering that vampires populate her town, college student Claire Danvers knows that the undead just want to live their lives. But someone else wants them to get ready to rumble. There’s a new extreme sport getting picked up on the Internet: bare-knuckle fights pitting captured vampires against each other – or humans. Tracking the remote signal leads Claire – accompanied by her friends and “frenemies” – to discover that what started as an online brawl will soon threaten everyone in Morganville.

Bite Club Audiobook is the newest installment  of  one the few YA series I love. Until now, all my reads/listens have been from the adult variety.
Although all the  books in this series are nerve racking, I did feel this was a lot more emotionally charged than the previous books.

The book opens right after Ghost Town (book 9).
Once again we get the action, suspense,  and a great story line that  will keep you listening from the first chapter to the end.
The scenario in this book is pretty intense and dark; the vampires are as bad-ass as ever, and just when you think you  are getting a break, Ms. Caine throws in another unexpected twist that makes the second part of this book impossible to put down, or in my case impossible to pause.
A new gym has opened up in Morganville, and Shane is thrilled to have a place where he will have a chance to kick  some vampire’s ass, and to have a place where he can vent his frustrations –  of course, he loves it! He  can’t stay away and begins to spent all of his time there.

He’s also getting angry, mean and cruel – he’s picking fights with all his friends and becoming an unrecognizable character, and even though excuses are giving for his unusual behavior they didn’t manage to erase the bad taste in my mouth. I have never been a big fan of Claire and Shane’s relationship and even more so after this book, you would think that after getting passages from Shane’s point of view, (which BTW, we get a lot of in this book) I would have a little more understanding, but I don’t, I guess that’s the genius writing of Rachel Caine, I like him… Sometimes, and I don’t a lot times.

Claire as always deals with it all with a maturity that’s far beyond her years, and with  the help of a cast of secondary characters that I have come to hold dear.

We do get to find out a lot more of what’s going on Shane’s  head, like the anger and confusion that seems to torture he’s soul.

Aside from Shane’s problems, Claire still has a lot going on. Eve once again is herself and still gets all the best lines.

Some unsavory characters from the past come back with new creepy ways to torture Claire and her friends.
All the characters are very engaging, and it’s been nice seeing how they have grown over the course of the series.

Now to my favorite parts!! And those are all the ones with Myrnin,  YAY! we get a lot of him in this book, and he’s as crazy and entertaining as ever, being a  big fan of Clarie/Myrnin, I truly enjoyed those parts. I still hold a little bit of hope for the two of them (Claire/Myrnin)… I know!!… I know!! sounds crazy, but I definitely see something there, even if it’s only in my head. ☺

If you haven’t listened or read any of these books, don’t miss out on this fantastic and engaging series, you’ll be hooked from the first book “Glass Houses”, and if you are a regular listener/reader do not miss this entry! Even though this is not one of my favorites, still is another fabulous, suspenseful, thrilling, fast moving and gripping  installment.
4.30 based on 20 ratings on audible.com

Again Cynthia Holloway does a terrific job with the narration, this is the 1Oth installment in this series, by now she has become the voice of Claire, Shane, Eve, Michael and Myrnin, and having listened to two different books with a different protagonist almost back to back, both narrated by Miss Holloway, and finding how she manages to capture each heroine with all their individual characteristics, it has convinced me of her talent and artistic sense.

The portrayal of these characters it’s delivered with a complete understanding of their personality. Her toned for the story is perfect, she uses the right emphasis for the suspense, low parts and high parts of the book.

All in all,  this is an excellent interpretation.