Review of: Glory in Death Audiobook 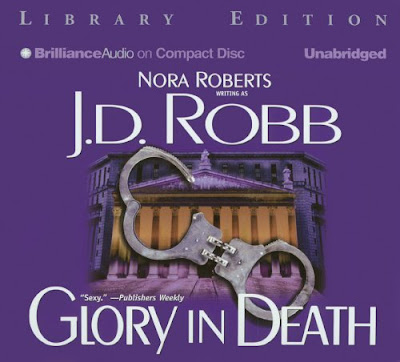 “It is 2058, New York City. In a world where technology can reveal the darkest of secrets, there’s only one place to hide a crime of passion-in the heart.”

Even in the mid-twenty-first century, during a time when genetic testing usually weeds out any violent hereditary traits before they can take over, murder still happens. The first victim is found lying on a sidewalk in the rain. The second is murdered in her own apartment building. Police Lieutenant Eve Dallas has no problem finding connections between the two crimes. Both victims were beautiful and highly successful women. Their glamorous lives and loves were the talk of the city. And their intimate relations with men of great power and wealth provide Eve with a long list of suspects-including her own lover, Roarke.”

New York Police and Security Lieutenant, Eve Dallas, and international Irish billionaire, Roarke. Past, present, future – what a couple!. But this, the second chapter in their relationship, isn’t all smooth sailing. There is a compelling confrontation that bears listening to twice. Up shot? I’ll take Roarke, even hot under the collar. At the end of this eruption, Eve asks Roarke why he wants her.
“Why?” He tilted his head. “That’s a tricky one. Could it be your serenity, your quiet manner, your flawless fashion sense?” It did his heart good to see her quick, amused grin. “No, I must be thinking of someone else. It must be your courage, your absolute dedication to balancing the scales, that restless mind, and that sweet corner of your heart that pushes you to care so much about so many.”

Can I confess I want to be Eve when I grow up? Especially if I get Roarke.

I started this series in the 90’s – when it first came out, but lost track of where I left off. So, I decided to “re-read” these via audiobooks instead of by the printed word. What a find! I like Susan Ericksen’s narration for all her audiobook deliveries, but it was like she was born to narrate J.D. Robb’s futuristic In Death series. So much is in her tone and inflection for all the amazing secondary characters of this additive series.

It is not easy to do both male and female voices and make them work, but Ms. Ericksen manages to capture their personalities, making each distinct: Ryan Feeney, Eve’s mentor who works miracles with computer searches in the Electronics Detective Division; compassionate Dr. Charlotte Mira, who has some surprising revelations of her own in this volume; “Commander” Jack Whitney and his wife Anna; Summerset, Roarke’s butler and Jack of all Trades, who ends up in a tussle with Eve; Nadine Furst, a reporter Eve actually respects; and Eve’s best friend Mavis Freestone, who she once busted for petty theft; each voice is impeccable. And in this one dependable and efficient Delia Peabody is introduced as a beat cop, present at one of the murder scenes, before she eventually becomes Eve’s invaluable aid and partner (with a hopeless crush on Roarke). Even the peripheral characters, such as Crack (who got his name because of the sound made when he knocks heads together), are pitch perfect.

The characters are great, but the mystery and suspense in this police procedural are captivating – all the way to the end – making it impossible for me to pick my favorite book from this series. I’ll just have to say it’s the one I’ve currently have downloaded on my iPod. 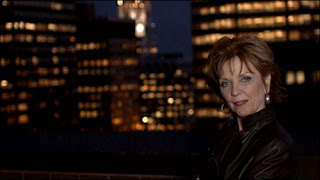 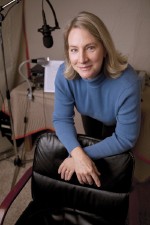