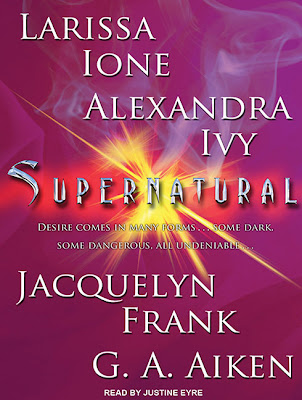 In this tantalizing collection, four New York Times bestselling authors invite you into the alluring worlds they’ve created in the Demonica, Guardians of Eternity, Nightwalkers, and Dragon Kin series. Each mesmerizing page will leave you craving more. . .

What can I say? Larissa Ione can do no wrong with me, and the novella in this book it’s not the exception.

Lena, a nurse we have previously met in Underground Hospital and Nate who has apparently been lined up to have an appearance in Thanatos’ book in the Lords of Deliverance #3 take center stage in this short in length but big in character development and excitement. This encapsulated all elements I love in her series Demonica.

This was just an Ok story; I imagine those who have read her Guardians of Eternity series will find it more enjoyable.
It did arouse my interest in this world and its characters; I’m planning to read or listen to the first book in the series, When Darkness Comes.

I love Ms. Frank Nightwalker series, so I don’t feel  good about giving this book such a low rating, but frankly, the character development was terribly poor, and the story was none existing, no chemistry was felt between the protagonist and that surely spoiled my enjoyment.

All I can say is: do not let this story discourage you from reading or listening to the entire series, this was a very poor example of her writing ability.

I was so glad to see this author be part of this anthology. I have tremendously enjoyed her entire series, Dragon kin. This was an excellent example of her ability; her stories are always full of humor, suspense, sensuality and her character development is always top notch.

I can promise you will want to read and hopefully listen (I hope the audio publishers take a chance with this series) to the whole series, which,  by the way, starts with, Dragon Actually.

Justine Eyre..well..is Justine Eyre; her interpretations are always right on target- her delivery combined with the right amount of emotion allow the listener to easily be transported to the world shes narrating- but this will only happen if you get pass as I have, her female voices and unique tone.

She’s excellent with the narration; her male voices and interpretations are some the best from a female reader. I just wish her approach to the female characters was a little more casual-without making them appear as if they were on the verge of a breakdown.

This is not my first experienced with Justine Eyre- despite the few negative factors I find in her delivery, the positives always outweigh the negatives, and  her performance has always enhance my enjoyment of the books. 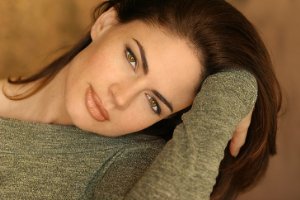