Review of: Desires After Dusk Audiobook 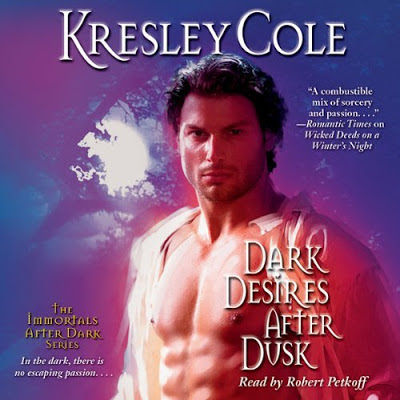 A seductive beauty he can never have, yet can’t resist….Cadeon Woede will stop at nothing to atone for the one wrong that will haunt him forever. But once he secures the key to his redemption, the halfling Holly Ashwin, Cade finds that the woman he thought he could use for his own ends and then forget haunts him as much as his past.A tormented warrior she should fear, but can’t deny…. Raised as a human, Holly never knew that some frightening legends are real until she encounters a brutal demon who inexplicably guards her like a treasure. Thrust into a sensual new world of myth and power, with him as her protector, she begins to crave the demon’s wicked touch.Surrender to dark desires…. Yet just when he earns Holly’s trust, will Cade be forced to betray the only woman who can sate his wildest needs – and claim his heart?

How is it possible that Robert Petkoff keeps getting better and better with each one of the releases of Kresley Cole’s Immortals After Dark series? I mean, Good Gravy Beans, I already had him as my Top Ten Narrators for two years running. I’ve pre-ordered every book in this series when it becomes available, stalked Ms. Cole’s and audible.com’s websites waiting for word of the next release so I can mark my calendar, and I’ve sought out books in other genres just to listen to him. So, what more does he want me to do?

Here he does to perfection the voice of one of my favorite heroes in this delightful series: Cadeon Woede, a rage demon, in love with a human named Holly Ashwin. One of the things I love about Cade is his sense of humor – and Mr. Petkoff infuses that readiness to laughter into his delivery of this Lore hunk’s voice. He does a wonderful job with the female vocalizations of Holly, Nïx, and Regin, too, rarely relying on a falsetto. And his voice for Groot? Delicious! Having the right narrator is imperative to an audiobook and Mr. Petkoff has nailed it every time, impressing me with his versatility with accents, pacing, and inflection. Plus, I swear, I swooned every time he said Holly’s name. **sigh**

To say the least, Cadeon is a big disappointment to his older brother, Rydstrom, deposed ruler of Rothkalina. Cade wants to prove himself by restoring his sibling to his rightful throne. How? By obtaining a mystical sword from a metallurgist named Groot, which will kill the usurper of Castle Tornin, the sorcerer Osmort. What does he need? Well, that would be a huge spoiler, and I would NOT want to ruin for you.

Cade is a primal male hero from Medieval times; known as a brutal mercenary, he’d prefer to live in the moment, but feels bound by his Princely duties to his brother. Holly is a new millennium spectacle-wearing geek, on the verge of completing her PhD in Mathematics, with a bad case of Obsessive–Compulsive Disorder. This installment puts them on a “road trip” together, another favorite setting of mine, with check-points along the way. I’m not big on bickering couples; nevertheless, I love bantering ones, and there is a difference. These two fun opposites pull off the later, while maintaining the chemistry and sexual tension between them.

I can’t recommend this one enough.

P.S. If you need a “zombie-like” character for a challenge, I think the cannibalistic Wendigos qualify: “corpse-eaters insatiable for flesh” who are “ravenous for blood.”