Review of: The King Audiobook

I was really excited to get The King Audibook, as with Lover At Last, the build up and hype was huge.  Most of the time, when a book is hyped as much as this one is, I’m usually disappointed.  It is just too difficult to live up to what I’m expecting. This was a problem that I had with The King. It is not the first time I’ve had this issue with one of Ward’s books.

With this story, we don’t have a new couple.  The book blurb talks all about Wrath, Beth and her desire to have a child and the weight of being the king has on Wrath.  Well, that is only a part of the story.  As with most of the BDB books, there is more than one storyline.  This one, however, starts off really chaotic.  There are so many different storylines I was starting to wonder if Ward somehow got ADD. There is a story for Xcor/Layla, Assail/Sola, Trez/Selena, S’Ex/Trez/iAm/world of the Shadows (I have no idea how to spell the actual name).  We have tons of flashbacks to Wrath’s parents, which I loved, but it always took me a second to figure out which “Wrath” we were talking about. I would give this part of the story 2.5 hearts.  It was just too chaotic and a lot of it just seemed like filler, which this book didn’t need.

Then there was also the story of Beth and Wrath.  This includes Wrath’s fight to keep the throne and Beth’s battle with Wrath to have a child.  This part of the story, is what I was expecting from Ward.  It showed Wrath’s passion to be king, as much as he hates it.  It shows the struggle between the vampire males and females and the trouble with reproducing and the danger that goes along with it.  It was great to see how passionate both partners were on their side of the argument.  I love how Wrath goes and talks to Zsadist and Thor about becoming a father.  We see Beth’s strength and tenacity as she works with Wrath on not only the young, but to keep his throne.  This part of the story deserves 4 stars, it was everything I would expect from a BDB book.

One thing I’ve always noticed with this series, but seemed to bother me more with this book than others in the past, is the product placement.  Ward drops name brands like it is going out of style.  With Lover At Last, someone did a blog post with a list of brand names (80 in total, I think).  Does the woman get paid for every brand name she uses the way they do with product placement in the movies.  I think I noticed it more, mostly because I was bored with crazy first part of the story.  Once we got to the parts focusing on Beth and Wrath and less on all the other stuff, I didn’t notice as much.  It was the same with the ghetto speak, it drove me crazy in the first part, but later in the story, I was able to ignore it.

The King isn’t my least favorite book in the series, Lover Enshrined still owns that title, but it is in the bottom half. Will I continue this series? Yes. I have so much invested in all these characters that I’ve loved for years. I don’t know that the series is as high on my list as it used to be.  I’m curious if Ward sees the end game for this series.  I’m not sure how many more books this series can handle. From the signing in Cincy, which I’ve only read the transcript that you can find on her Facebook page, it sounds like there are quite a few more to go. I think I just need to quit expecting books to “wow” me the way the first few books did and I’ll be okay 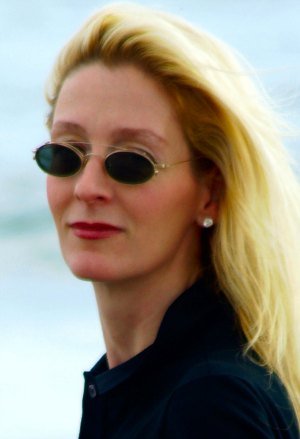 The narration is perfect for this series.  Jim Frangione does a great job with all the ghetto speak. He is great with his continuity throughout the entire series.  I can’t remember a single time he has changed the pronunciation of any of the strange language or names throughout the entire series. I don’t think anybody could do a better job with this series.